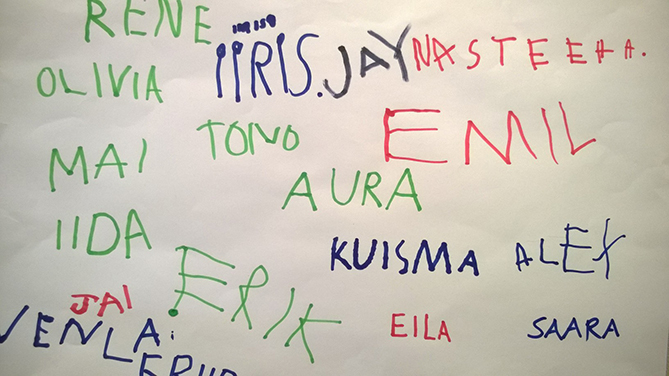 The new Act on Forenames and Surnames will enter into force on 1 January 2019. The new Act will increase freedom of choice in name matters. The current provisions that are based on the Finnish name practices will be loosened, for example by allowing compound surnames.

The provisions of the current Names Act that are based on the established Finnish name practices will be loosened. The new Act on Forenames and Surnames will simultaneously take account of Finland’s internationalisation and safeguard the traditional Finnish name culture. The protection of surnames in use will mainly remain unchanged. The child's best interests will be given more consideration in the decision-making concerning names.

Overlaps in the activities of different authorities will be reduced and the processing times for applications will be shortened. Electronic services for submitting notifications and applications concerning names and name changes will be established.

The reform was prompted by changes in the family structures, such as the increased number of unmarried and international families, and people's increased willingness to give and adopt more individualistic names.

In future, the maximum number of forenames a person may have will be four instead of the current three. Forenames will no longer be required to comply with the established Finnish name practices, but instead, the acceptability of a proposed new forename will be assessed in relation to all forenames being used in Finland regardless of their country of origin.

The absolute impediments to the approval of a forename will be defined in more detail. For example, the harm caused by a forename must be assessed in a different way depending on whether the name is to be given to a child or whether an adult is changing his or her own name.

The time limit for submitting a notification of a child's name will be lengthened from two to three months.

Compound surnames will be allowed

The new Act will allow combining two surnames to form a compound surname. This means, for example, that a child can be given a compound surname and thus have a link to both parents’ names in situations where the parents have different surnames.

Allowing the adoption of compound surnames takes better account of the different situations families have and increases equality and cohesion in unmarried and blended families, for example. In future, spouses will have an equal opportunity to form a compound surname of each other's surnames. This enables them to have a common name without either of them having to surrender their own name identity or their link to the name of their possible children.

Spouses may still choose to adopt a single common surname that will also be transferred to their children as such.

A child may also be given a surname or a compound surname formed in compliance with the name practices of a foreign state, if the parents have a connection to that foreign state due to their citizenship or some other equivalent circumstance.

Possibility for cohabiting partners to adopt a common surname

Under the new Act, cohabiting partners will have the right to adopt a common surname or compound surname upon application. The requirement for this is that the applicants have lived in the same household for at least five years or that they have a common child or a child in joint custody.

Submission of matters to the Names Board to be considerably limited

Electronic processing of name matters will be introduced at the local register offices gradually during the year 2019. The objective is that simple notifications and name changes will be processed automatically after a transitional period and only cases that require discretion will be processed by public officials. The possibility for electronic processing will shorten the processing times and facilitate procedures especially in routine cases.

These reforms serve the Government's objectives of streamlining legislation, deregulation and reducing the regulatory burden. The electronic processing of notifications and applications is in line with the Government’s objective to digitalise public services and to design services in a user-oriented manner.

Married spouses' choice of surname will be governed by the new Act if they request an examination of impediments to marriage on 1 January 2019 or later. It is also possible for spouses to adopt a surname in accordance with the new Act later, after the marriage ceremony, if they submit a separate application.

A combination of a common surname and a surname in personal use, referred to in the previous Names Act, will automatically be deemed a compound surname upon entry into force of the new Act. The practical difference between these two types of surnames is that a compound surname under the new Act can be given to a child as such.