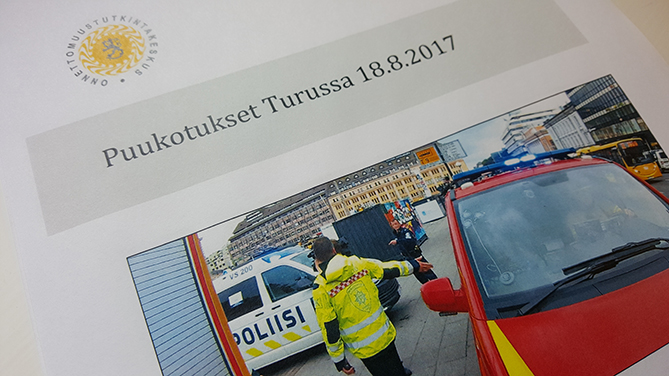 The actions of the police, emergency medical services, the Finnish Security Intelligence Service and the Finnish Immigration Service as well as psychosocial support were examined in the investigation, among other things. Social media was examined separately. The purpose of a safety investigation is to improve safety, which is why questions related to legal liability were not addressed.

In its report, the investigation team gives nine safety recommendations in order to prevent similar attacks, minimise damages and improve safety in the future.

The investigation team recommends that (1) the Finnish Immigration Service and the Ministry of Justice ensure that the average total processing time of asylum decisions and appeals lodged against them in administrative courts be shortened from the current average of 1.5 years. The accelerated procedure should be applied whenever the law allows this. An asylum matter should be processed in an expedited manner if the applicant is considered to pose a threat to safety.

A swift negative decision is often better for the applicant than an unclear situation that continues for a long time. During the wait for a decision, it is usually difficult for the asylum seeker to adapt and integrate into Finnish society, which may lead to an increased risk of Islamic radicalisation. Persons who have lost their dignity and direction in life are sought-after targets for determined and skilfully implemented brainwashing and recruitment for violent Islamic extremism.

Second, the investigation team recommends that (2) the Finnish Immigration Service make use of all reasonable means available to establish the identity and age of asylum seekers. This requires that the Immigration Service develop its procedures. Possible means include a special examination of this question during the asylum interview, utilisation of the forensic age assessment, and requesting of information from the applicant's home country in cases where the threat against the applicant is not posed by the home country. The perpetrator of the stabbings had given a false name and age upon arrival in Finland, and the authorities had not been aware of this before the stabbings took place.

Third, the investigation team recommends that (3) the Ministry of the Interior ensure that an advisory service be established in connection with the Finnish Immigration Service or some third-sector actor. The service could be contacted by persons who have questions or concerns related to asylum seekers. The service provider should be familiar with and have close connections to the key cooperation partners such as the police, religious communities and different entities providing assistance, and it would be tasked with providing advice and guiding help-seeking persons to appropriate services and authorities. The advisory service should be marketed efficiently for example at reception centres, among religious communities, on the internet, and in face-to-face encounters with asylum seekers.

For more than six months before the stabbing, persons close to the perpetrator had observed with concern that the perpetrator was showing increasing interest in radical Islamism and Isis's propaganda. Especially the early signs of radicalisation – appearing before any offences have been committed – can best be identified by people present in the everyday life of the radicalised person. Asylum seekers are one of the key groups at risk of becoming radicalised. It is important to provide people close to asylum seekers with a low-threshold channel for expressing their concerns and asking for advice. In the case investigated, the only concrete information that had reached the authorities before the attack was a tip-off received in January 2017. The act could not, however, be prevented even though this information was forwarded to three different organisations: the local police, the National Bureau of Investigation and the Finnish Security Intelligence Service.

During the investigation, it became clear that the work being carried out to prevent radicalisation is under-resourced and incoherently organised. Therefore, the investigation team recommends that (4) the Ministry of the Interior and the Ministry of Social Affairs and Health explore how the financing, guidance and supervision of NGOs necessary in the prevention of radicalisation should be arranged to enable these organisations to carry out their activities nationwide and on a long-term basis. Authorities and other relevant actors should be made well aware of the services provided by these organisations so that they could refer persons in need of assistance to them.

The fifth recommendation issued by the investigation team is that (5) the National Police Board and the Finnish Security Intelligence Service should together agree on clear procedures to be followed in the prevention of radicalisation. These procedures should encompass a sufficient amount of observation and trust building among people and communities, and they should enable authorities to guide people in the process of becoming radicalised to the relevant services in time. During the initial stages of radicalisation, it is often some other actor than the police that plays a crucial role in the prevention of further progress – for example healthcare services, social services, reception centres, NGOs, friends and family members, and religious communities.

It also turned out in the investigation that authorities have somewhat divergent views of leadership in situations involving a number of authorities. Such situations require close and efficient cooperation and mutual communication between the involved authorities. All actors must be active, understand the overall situation, share up-to-date information on the situation, and take account of the duties and needs of the other authorities. Therefore, the investigation team recommends that (6) the Ministry of the Interior and the Ministry of Social Affairs and Health harmonise their leadership and communication practices in situations involving a number of authorities so that all necessary authorities can and will be actively involved in sudden major incidents. The key actors in this respect are emergency response centres, police, rescue services, emergency medical services and social services (incl. psychosocial support).

The investigation team also recommends that (7) the Ministry of the Interior and the Emergency Response Centre Administration develop new means to quickly warn the population in case of emergencies. It would be effective to send warnings as text messages and through dedicated applications (e.g. 112 Suomi application) to the mobile phones of all those in the vicinity of an incident.

In the case investigated, the police caught the perpetrator in three minutes after the stabbing had begun. Thus, there was no time nor need to issue an emergency warning. Emergency warnings broadcast on television and on the radio are not suitable for quick situations like this.

As its ninth safety recommendation, the investigation team recommends that (9) the Ministry of the Interior and the Ministry of Social Affairs and Health prepare provisions under which the police and healthcare professionals are obliged to disclose information on the identities of victims and their close relatives to providers of psychosocial support in case of accidents and violent crime. In the case investigated, actors providing psychosocial support had difficulties to obtain information on the identities of the victims and their close relatives, which prevented them from providing these persons with support immediately after the incident. It turned out in the investigation that the legislation does not contain any provisions under which the police could disclose victims' personal data to actors providing psychosocial support.

Press release: An English version of the safety investigation report of the August 2017 terrorist attack in Turku, Finland has been completed